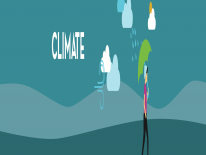 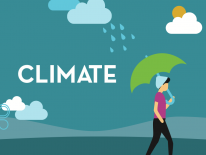 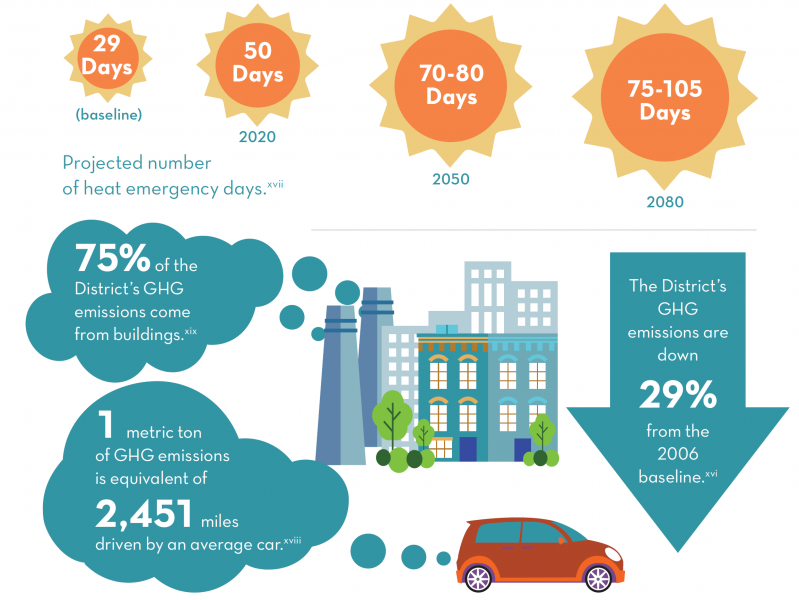 The District is already experiencing the impacts of human-made climate change. Climate change refers to long-term changes in global temperature, precipitation, wind patterns, and other aspects of climate. These global changes have serious consequences at the District level. In the past few years, the District has seen record-breaking extreme weather (like heat waves and snowstorms), higher tides caused by rising sea level, heavy rains and flooding, and warmer average temperatures and two to three times as many dangerously hot days.

The District Government is approaching climate change from two sides: mitigation and adaptation. Mitigation refers to reducing the following greenhouse gas emissions (GHGs)—carbon dioxide, methane, and nitrous oxide. The District’s Clean Energy DC plan is the roadmap to achieve the Sustainable DC goal of reducing GHGs by 50% by 2032. The District is also committed to becoming carbon neutral by 2050. Progress toward this goal is measured by an annual inventory of the city’s GHGs. Since the District began tracking GHGs in 2006, emissions have fallen by approximately 29 percent. This is progress, but there is much more work to do. Adaptation means being prepared for the impacts of climate change. The District Government has outlined how the city will adapt in the Climate Ready DC plan.

The Sustainable DC 2.0 goals are to:

The District has appointed a Chief Resilience Officer to help coordinate resiliency efforts, including climate, and developed the Resilient DC plan. In 2020, the Chief Resilience Officer also took on the role of Chief of Resilience and Emergency Preparedness. The District has also developed a detailed climate mitigation plan (Clean Energy DC) and a climate adaptation plan (Climate Ready DC). DC participates in several international and national programs helping combat climate change, most notably 100 Resilient Cities, the American Cities Climate Challenge, and C40. However, District Government is focusing much of its attention at the hyper-local level with community advisory groups working on resiliency hubs in Far Northeast Ward 7 and hosting ongoing community discussions on renewable energy and equity in Ward 8. While the District Government puts out a GHG inventory each year, we are looking out even further to determine how we will reach Mayor Bowser’s commitment to becoming carbon-free by 2050.

The Climate goals also directly connect to goals in Built Environment, Energy, and Transportation, and Waste.

Read the entire Climate section and its actions below, or read the whole plan here.

There are ways to take action to prevent further climate change at home and in your community: learn more here.

Are you interested in entering a career supporting sustainability in the Built Environment? Learn about DC's workforce training programs for green jobs here.

Want to volunteer with SDC as we work to combat climate change? Find out how here.